You are here: Home › Basecamp Efficiently Organizes People and Projects 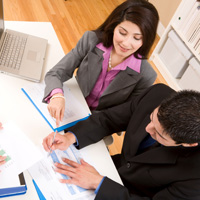 Remember this story? “There were four people named Everybody, Somebody, Anybody, and Nobody. There was an important job to be done and Everybody was sure that Somebody would do it. Anybody could have done it, but . . ”

Virtually any company can get more organized and productive with Basecamp. Organizing projects and assigning accountability are crucial to any business, and Basecamp makes this easy. It’s also a secure place to store data that only select team members can access.

Have you sat through endless meetings where everyone is scribbling their own “to do’s” in their notebooks? How can everyone get on the same page when they are all writing on different pages? Companies with remote workers, multiple offices or far-flung vendors can’t even start to get organized without a reliable, feature-rich project management system that everyone can access. Basecamp is perfect for both managers and workers. And it’s a lot easier to understand than a zillion email messages.

A colleague of mine runs 5 retail stores, a small entertainment facility, and two large online stores. It used to be impossible for him to go out of town and keep everything running. Now, he just whips out his iPhone, iPad or laptop and runs Basecamp (or an app that can access his Basecamp system). He can see how projects are moving along at a glance, and help employees prioritize. He can add or remove tasks, and re-assign them to others. He sets due dates and project milestones. He sets up meetings. Everything keeps humming along smoothly, even when he’s not there.

All the people who are involved in a specific project can work together. The administrators decide who sees each project, as well as who sees each other. You can include your team, clients, contractors, and vendors. When someone isn’t needed on a project anymore, access can be revoked by an administrator.

We started using Basecamp because, while everyone could keep track of their own “to-do’s”, I couldn’t really organize the team members and vendors. A snowstorm of emails back and forth just made some team members more confused. Stuff didn’t get done, projects fell behind schedule, and to-do’s were dropped all together. I needed to do something quickly. And when I saw my friend staying on top of his business with Basecamp, I had to give it a try.

I was skeptical that Basecamp would be easy to set up, because every system says that, right? But truthfully, I was up and running with their free 45 day trial in minutes. I just entered information about my company and started a “project” for each client. Within each project/company, I created “to-do” lists and added tasks with deadlines.

Some Basecamp users have a different business structure and will organize themselves differently. For example, a software development company would probably organize a project for each app they are making; a fitness center might just have the marketing department organize their marketing projects, etc.

Everyone on the project can get involved in the conversation, and it’s all in one place and organized chronologically. When a “to-do” gets assigned to someone, they can receive an email notification.

Other great features include:

The system is web-based, so anyone with a browser can access it. No need to install anything on a local server, and backups are taken care of.

Pricing starts at $20/month, but that’s only for 10 projects. When it was time to buy, we got the $50/month version, which allows 40 projects. Having a separate project for each client allowed us to organize all the “to-do’s, due today” in one screen. The cost includes an unlimited number of users, data encryption, and daily backups. This is well worth the cost, as losing even a single client due to missed deadlines is far more expensive.

The best part about Basecamp is that tasks can be assigned to an individual. They can be held accountable for completing the task and can’t say “I didn’t know I was responsible for that!” or “I didn’t know the deadline.” Basecamp stops this from happening:

We hope you enjoy our informative business related articles. Next time you think you need an ACH payments service, give us a call!

← Boost Your Bottom Line by Retaining Existing Customers
What is a Merchant Service Provider? →