You are here: Home › Update Your Website for Tablets 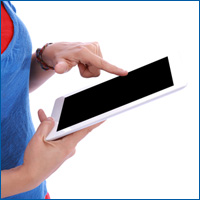 Tablets such as the iPad and Kindle Fire are becoming increasingly popular, so your website needs to cater to tablets. Many people exclusively think “smartphone” when considering mobile internet access, however, it is time to include the tablet in the conversation. According to a new survey by the Pew Research Center’s Internet and American Life Project, slightly more than a third of American adults (34%) own tablets now. This is nearly double the reported ownership of just last year (18%).

The survey collected data from more than 2,200 adults in the United States. It found that tablet adoption is highest among 35- to 44-year-olds. In this age group, 49 percent of respondents said they now own a tablet. This data makes sense as the tablet provides a much larger screen that is easy to work with. Tablet screens average around 8 to 9 inches diagonally, more than four times the area of a typical smartphone, without losing much mobility.

To take advantage of this increased size, businesses should test their website on a tablet. Visit your website using a tablet, and ask yourself the following questions:

Many businesses are already making mobile websites a priority because of the explosion in smartphone usage. However, it is also possible to create a mobile website that is customized for tablet users. The best online experiences stem from a seamless transition from smartphone to desktop computer to laptop to tablet. This allows users to access your services anytime and anywhere, however they please.

Other interesting data from the study showed that:

The takeaway for businesses is this: Smartphones are generally the first thing people think of when it comes to mobile. However, tablets are also playing an important role in the lives of your customers. Tablet adoption nearly doubled in the last year. More than a third of all Americans are now accessing the internet via a tablet. It’s never been more important to get ready for mobile.

Thanks for visiting us at ACH Payments!