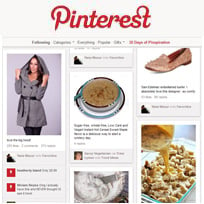 Pinterest just became more business-friendly by allowing businesses to create their own accounts. Until now, this online pinboard of pictures has been for individual accounts only. The social media service now include business tools like Follow and Pin It buttons, and Pinterest widgets. This makes Pinterest an increasingly viable social media marketing tool for businesses of many different types.

Pinterest is a great place for attraction-based marketing, and a bad place for hard selling. In the same way that flowers produce nectar to attract bees, companies create attractive Pinterest boards to attract people interested in visuals associated with the company, market or industry. It is useful for visually-oriented businesses (stores, artisans, artists, designers, dance studios, photographers, jewelers, crafters) and other types of businesses. For example, inspiring quotes, funny cartoons, history, and new ideas all have images associated with them that could be used on Pinterest.

To help businesses use Pinterest effectively, Pinterest has launched a new site called “Pinterest for Business” (business.pinterest.com). It is filled with case studies,  guidelines for brands and best practices.

Just how far Pinterest will go for business remains to be seen, but here is one indicator: The company was valued at $1.5 billion in 2012.

Now I know why I keep recommending ACH Payments to other Sedona users.  You always get problems solved quickly.  Just recommended you to the Sonitrol dealer in Buffalo-they also have Toronto Canada.